I used to make crochet Halloween costumes for my kids. The biggest effort was in 2011 when my children became a princess and medieval prince.

I was cruising around the internet, as one does, and found an interesting article about Stephanie Pokorny. She’s an Ohio mom who has gone viral for the incredible Halloween costumes she creates for her children.

It got me thinking of the costumes I used to make for my kids. The biggest effort was in 2011 when my children were then 5 and 3.

My daughter was a princess and my son was a knight.

I even had enough yarn leftover to make them trick or treat bags to collect their candy in!

Strolling through the craft aisles one rainy afternoon, I stumbled across the Red Heart pattern book, “Princesses and Heroes“.

I saw it and KNEW it was going to be an instant hit with the kids! They each got to point to the costume they wanted and off I went to stock up on supplies.

I don’t know who was more excited – the kids or me. Let me say, there were lots of late nights but it was SO worth it.

Taking the children trick or treating that night, I was thrilled when finally, after houses and houses and houses, one neighbour exclaimed “Oh my goodness! Did somebody crochet that for you?!”.

My heart swelled up to my throat and I think I even blushed as I waited from the sidewalk.

It obviously made an impression as I’m still talking about it today!

As I read the article on Stephanie Pokorny and the incredible costumes she makes her children, I smiled to myself.

My creations may have only been recognized by one bachelor that night, but that doesn’t matter. My children had the gift of a handmade Halloween costume from their mother.

After their official debut, the costumes ended up in our toybox and made for many years of dress-up costumes which also made me happy they could find more of a use.

My children’s handmade costumes made me realize that not everybody has someone who can make for them as I can, so I made my character hats more than just a hat.

The hats are designed to encourage children to use them as costumes to become their favourite characters.

If you are scrambling for a last-minute Halloween costume, why not make one of the hats for your little one and make a costume around it?

I have patterns available in both crochet and knit versions in the shop.

Please let me know if you get comments on your handmade powers too!

This article was featured in the Guelph Local lifestyle section on October 30, 2019. 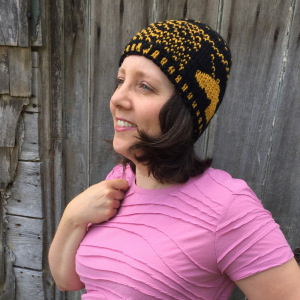 This circus-themed quilt was given to my second cousin’s son. What does that make him? My second cousin once-removed or a third cousin? Anyhow, they loved it! The front panel is 100% cotton panel front and I used a blue checked flannel back and binding. I quilted a free motion loop with my long-arm quilting machine.

This afternoon I will be at my third and final craft show for the season. Three weekends in a row sitting and smiling and engaging potential present and future clients. I believe it is important to have a presence in the community for word of mouth and face-to-face to be a potential business attraction. I know myself I prefer to do business with people who I “know” rather than a sterile webpage. Crafting is all about art and the human reaction to it and that is how I would like to represent my business. The product may not have been

I made this afghan in 2012 to use up some scraps. It’s a giant granny square. The bright colours will cheer any room.